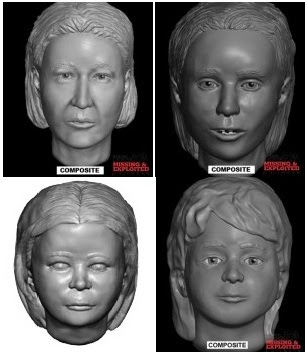 You can call us Sandra, Molly, Bet and Mary if you want. The names are in order by our age from the eldest to the youngest. But those are not our names. We have been dubbed with Temporary Doe Names.

I’m Sandra, I’m 23 or 32 or somewhere in between. I may have been a mom. I was a woman. I was alive. Then I was found dead. Three children were also found dead. This is our story.

In November 1985, my remains along with that of a child approximately eight to ten years old were found stuffed inside of a 55 gallon metal drum. Disposed of like toxic waste. The drum was located near near in . While the homicide report online shows the cause of death as withheld, the media reports that both of us were killed by blunt force trauma. It’s also been noted by several sources that our deaths were brutal and viscous. The child that was found with me may have a family connection to me. I was killed with this child and disposed near this trailer park sometime between 1977 and 1985.

The above seems horrid and unbelievable, but it gets worse. In May 2000, another metal drum was discovered only but a mere 100 yards away. This drum contained two children. Both children had been murdered. One of these two children the youngest, one to three years of age is also believed to be my child. From testing the third child age four to eight years old cannot be confirmed as being related. Two more children, whether my blood or not, most definitely I cared for them, I loved them and I feared for them! They were found 15 years after they discovered me. They had only been 100 yards away. My child. My agony. My pain.

Here is what little information there is that might help you:

SANDRA DOE– 23 to 32 years old, given birth, stood about 5’2 to 5’7, and had curly light brown hair approximately four inches long

BET DOE – 4 to 8 years old, approximately 3'8 tall and had a noticeable overbite

We were all White or Native American.

UPDATED NOTE OCT 2011:
*These victims have a potential family connection. Department of Justice is waiting for Nuclear DNA tests that are pending to learn more about the family relations. The above was modified slightly to remove any affirmation that she was a mother or the mother of these children.

Update Note June 2013
Tests have confirmed that she is the mother to two of these young victims.  The third child also appears to have a family connection.

I've never seen so many of these pictures in one place. Interesting blog, I'll ad you to my blog list.

Thank you for stopping by and viewing all the unidentified featured here. It is sad that we have over 40 thousand men, women and children that remain unnamed and unclaimed.

I appreciate you adding CYIM to your blogroll. It is so important that we reach as many people as possible. You never know when that next person might be a family member or friend who can identify one of these individuals.

Thank you for your support.

My heart is aching. Poor babies!.
The following has nothing to do with this case, but wanted to add some info. I am 80 years old, born and raised in California. Moved to Oregon when I was a teen. Had my first tooth ache when I lived in Oregon. The dentist I went to said I wasn't from OR, said either CA or named others.(I didn't pay attention) Said he could tell by the shape my teeth were in??? How?? I have no idea. But something to think about> Shirl

Seems like they were from another area and brought there in the drums. No schools reported any missing children? Back then they probably did not. There has to be some family member who knows something....

The terror families feel when loved ones goes missing is bad enough. To be found and not be brought home because we didn't have the scientific methods is horrible. To never have been missed is down right cruel. I was lucky. Mine was found and identified. There should never be another one unidentified. Thanks for bringing this to everyone's attention. I am hopeful this familymwillmhave answers soon.

This recreation of the mother's face has a Native American look to it, particularly around the eyes and nose. As an artist (who also minored in Native American studies)I think the children aren't necessarily old enough to have NA features--but rather haveuniversal baby to little girl features. Also, the other half of their genetic heritage could be white. I compared this recreation with the one released in June 2013, and while there is some NA to that one, the one on your blog definitely would point to NA heritage. Thank you for your work. You are helping many disenfranchised people--the people who folks don't miss, or whose kin haven't the wherewithal, courage or finances to keep looking for them.

I think that if this case was featured on television now, after all these years that someone might come forward. Sometimes people are afraid to say anything but might say something now. Something might jog someone's memory or maybe the perp. could be dead and the threat gone. I suggest, strongly, that you might contact John Walsh on the Hunted (new show 2014) and ask him to feature this case, he always wants to give victims justice and this case cries out for justice.

The last update was in 2013...is there any information since then?