Loraine Doe – A victim of abuse? 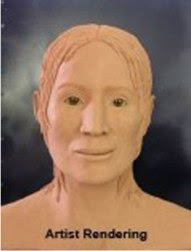 In my lifetime could I have been a victim of abuse? At some point in my life I suffered a fracture of the 7th rib of the front rib cage. After I turned 18, I suffered “a left maxillary fracture on the facial aspect of the maxillary bone including the left orbital rim at the interior portion” which translated means a broken left cheek, nose and left eye socket. Those injuries probably left me deformed, noticeably deformed. One way was that I lost two front teeth and wore a two tooth partial plate. These injuries, well, they were old injuries. They had well healed over before, before they found me.

On August 28, 2005, they found me. It depends on if you believe in spirits and moving on. If you do what they found were my remains. Maybe, I was still around lingering and watching. You’ll never know. They won’t know either. But some day someone will.

On that 28th day of August, five years ago my remains were located in a wooded location at an MTO picnic area on Highway #7 west of Rockwood, near . I didn’t die there. I was drug there. I was drug into the wooded area and left, left for dead. Sure I had been covered with a sleeping bag, ironically the bags brand name was WOODS. I’m not amused.

Leaving the sleeping bag over me, was this a loved ones way of respecting the dead? Or was it more sinister with a hint of remorse? Does it matter?

The reality of this ordeal, the reason I’m here on this blog, is simply – they don’t know my name!

You feel bad for me? Stop. Well, okay fine, you can feel bad for me. Honestly, it doesn’t matter. What does matter is finding my identity. Do you know me? How could you? I haven’t told you anything yet.
I was a Caucasian female, about 25 to 45 years old. I stood about 5’4 to 5’6 tall and I weighed about 130 lbs. I had dark brown hair that had recently been lightened and appeared reddish brown.

That day in August five years ago I was wearing “an "Atmosphere" brand tank top shirt, beige in color, size 10/12, 1 inch straps with a round neck line.

… "Illegal Jeanswear" brand shorts, black in color, size 9, corduroy fabric which had 2 horizontal zippered front pockets and two back pockets with button down flaps. "725 Originals" style brassiere, pink in color, Number "31" printed on left cup. Underwear … [was] "Rivage Intimate" thong style, white in style, with a small bow at the waist.” Plus, I wasn’t wearing any shoes, nor did I sport any tattoos or wear jewelry – at least not on that day.

Now that you know my bra and panty information maybe that will help you tell them who I am? Doubtful! The no shoe thing is interesting. Right? I didn’t walk to this picnic area if I didn’t have shoes on. And this highway it’s well traveled by local commuters and not by long distance drivers. Another interesting fact – can you use this to help tell them who I am?

The only thing left to mention is that when I was found on that day in August 2005, I didn’t die that day. No, I most likely died a month earlier. That day, that day was just the day someone discovered my remains. And therein the mystery of my identity began.

It breaks my heart reading about all the unidentified. I have an aunt that is missing and Im always reading your blog in hopes, that possibly I can find her and give her a decent burial. Thank You for all your hard work!

The brand Atmosphere is a label from Primark which is a clothing company from the Uk.

This story, more than most, just breaks my heart. Someone in a position of trust, someone this poor women thought cared for her -- put their hands on her and ended her life. This obviously was not the first time she's suffered physical abuse. The thought of this poor woman abandoned under sleeping bag, left lying in the woods -- has touched me. I feel for her. I feel for the people she left behind. Some of these people don't even know what they've lost, they don't even know that she's gone. Until someone finds her identity, no one can celebrate the life she left behind and the person she was.

More women will be left in this condition every day. If you are in a situation where you are in fear for your safety or the safety of your children, please, reach out for help.

This is the domestic abuse hotline website. There are people who care, that want you safe. What happened to this woman is tragic and heartbreaking, and it CAN HAPPEN TO YOU, to someone you love. Please get help.
http://www.thehotline.org/

I will keep this woman in my prayers, thoughts, and in my heart. No one should suffer this.