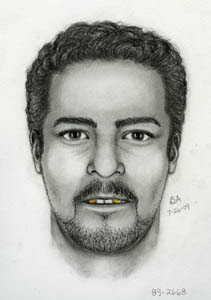 The year was 1989 and it was the month of September. The holidays were right around the corner. I wore a wedding ring. I was probably married. Are you married? If you are then you know that the holiday season is one to look forward to and rejoice. I guess if you’re single it might be a harder time of year. The wedding ring I wore indicated that I probably was looking forward to the next few months spending time with my wife, maybe I even had kids.

The problem is that sometime around August 1989 someone decided for me that I would never see the holiday season that year. Someone shot me dead. After I was shot, I was wrapped up in a distinctive animal print tan comforter. I believe it was jungle cats, yes, a jungle cats tan comforter is what was wrapped around my body. It would be funny if you learned that the person who shot me, wrapped me in the comforter and threw me off the side of the road also included matching pillows wouldn’t it? I don’t recall if they were matching, but start laughing because they found print sofa pillows. I guess they shot me on the couch and had to get rid of the evidence. I guess. There was also a blue sleeping bag thrown into the mix. I hope my family isn’t reading this right now. You know but at least if they are they’ll finally learn what happened to me. If I’m not mistaken it’s been over twenty years. It’s time my family discovered my fate.

This really cool forensic artist lady came over to Sacramento Coroners office and helped them by providing a sketch of my likeness. With this sketch someone out there has got to recognize me. With that wedding ring, I know someone is searching for me. I pray that my family finds out soon what happened to me.

VIEW HIS PROFILE DATA AT A GLANCE HERE: Sacramento California John Doe September 1989
Posted by RJ at 9:35 AM

Scary thought: What if the wife is the reason he was killed? Still, there has to be someone looking for him. So sad.