Eklutna Annie – Put the focus back on me!

I’m a person. I was a person. I am a person. It’s complicated. What you need to know is how we got here. That's the story I’m about to tell you.

My reality is that I was in my late teens to early twenties in 1979. I was four feet eleven to five feet to three inches tall -- somewhere in that ballpark. I guess I was on the shorter side of life. My hair was a light brown to reddish blonde color and it was long, like maybe to, the middle of my back. 1979: I remember that year like it was yesterday. I had these knee high reddish brown vinyl boots and a brown leather jacket that I loved. My jewelry may not have been expensive, but it made me feel good. I owned several really unique pieces; some even may have been hand made. Maybe I made them? I’m not sharing that with you. I’ll let you figure it out. Well, anyway, 1979: what a year.

July 4, 1979 might have been my last official holiday. I didn’t stop celebrating holidays so much as I wasn’t really around anymore to celebrate them, if you know what I mean!

This is where my story really ends and someone else’s begins. I’m really tired of mine ending and his beginning. Honestly, I think I’d prefer it the other way around.

On July 22, 1980, repairmen working on some electrical lines on Eklutna Road found the human remains of a white, brunette, female. She had no identification. The early reports only stated she had been stabbed to death and could have been killed up to a year prior to discovery.

Yes, that was me. Pay attention!

You’re probably wondering who he is -- you know the guy whose story that begins where mine ends? Well, he is a serial killer named Robert Hansen. A local baker, blah blah blah… This guy, this serial killer allegedly killed me, or so he admitted to doing. Then this guy didn’t even have the decency to remember my name or enough about me to help them identify me after he killed me. 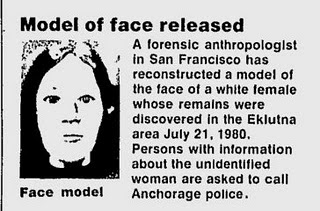 According to a 2003 Anchorage Daily News report, Robert Hansen told the troopers I might have been a “topless dancer". He also told them that I figured out he wasn’t taking me where he said and I struggled to get out of the car. At one point I did escape, and I ran. However, the creepoid caught me and we fought. According to him, I pulled a knife and I think he said he used it on me. DUH, someone used a knife on me. I was stabbed to death. Then there was the afterthought, where it’s mentioned that he thought I might have been from Kodiak. Again, this all came from the 2003 article by the Anchorage Daily News, not word for word of course, it’s paraphrased. But you get the idea. Anyway, how can we believe what he said? Sure he got caught and put in jail after killing seventeen women. 17! Still, that doesn’t mean that the account he gave was accurate.

When you look information up about me all you find, time and time again, is Robert Hansen this and Robert Hansen that. The guy was a serial killer. He killed seventeen women --we get it! What about me? I think it’s time to put the focus back on me.

You know, focus on the 20-something-year-old dancer who died. Who was I? Who am I? I have family looking for me. I have friends who must have worried sick about me when I didn’t come back. Where am I from? How did I get to Alaska? The State Troopers think I might have been part of a sex trafficking ring and maybe from California, Alaska, Washington or Oregon. Maybe I was from one of those states, or maybe even Canada or the Eastern states of America? What about the mid-west? Maybe I wasn’t from North America, maybe another Country altogether.

Whereever I was from, whoever I am, someone is looking for me. It’s time to put the focus back on me! 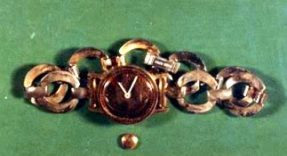 If you have any information, please call:

HER PROFILE DATA AT A GLANCE: Anchorage Alaska Jane Doe July 1980
Posted by RJ at 5:05 AM

Couldn't they get any DNA from the remains? What about dental records?

All the speculation about her history makes it even more confusing. Why would someone think she might be a topless dancer? She just might have been in the wrong place at the wrong time.

Written by the mother of a missing person.

First NIC number is synonymous with NCIC number. The NCIC database actually creates an NIC number. I think its the department who chooses how they label the number NCIC or NIC. On the official form it's either or NCIC/ NIC Number.

In Annie's case I believe that DNA and Dental records are in fact available. Unfortunately, they are only helpful when having something to compare them to.

Speculation about cases come from so many different sources. Sometimes the speculation comes from people in the community who knew the victim without knowing who the victim was, and other times it can come directly from law enforcement. In this instance, the comment about Annie being a topless dancer came directly from the serial killer who murdered this young lady. Unfortunately, with serial killers the cops have to go with whatever facts or details they remember about their victims. Sometimes they remember plenty and other times not enough for law enforcement to identify the victim. Annie is only of these cases we have featured here on our site.

I agree 100% with you in that she might have been in the wrong place at the wrong time, regardless of what she did for a living.

It's hard to hear these details when searching for your own loved one. I wish you didn't have to travel this road. Team CYIM will send up prayers for you and your loved one. May you two be reunited again soon.

If you need anything at anytime Can You Identify Me is here for you.

Thank you for taking the time to comment here and speak up on this young ladies behalf.

All My Best,
Rebel J. Morris
Can You Identify Me

DNA is only viable if you have someone to match it too. DNA doesn't just tell who you are if no one is looking for you. So very sad that no one has ever come forward looking for these poor girls!

I think that her killer Robert Hansen stated she was working as a topless dancer when he picked her up. Regardless of what she did to earn a living, she didn't deserve to be murdered.