I have a family that is missing me. Do you know me? 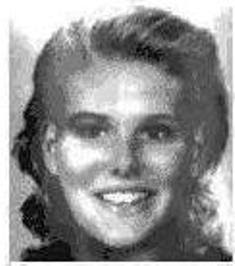 Hello. I have a horrid ending to my life. While I'd rather not focus on those details it might be the only way to trace back to discovering my actual identity. I may be someone's mother. My child might be graduating high school this year. Maybe I have a husband, a mother, a father or siblings that are missing me. Will you please help me find them by circulating my photo? I could use your help.

About me I was a very slender blonde about 5'8 and 144 lbs. I liked pink nail polish. I had a few scars a couple on my right lower leg, something above my right ear, and lesion on my scalp. My ears were pierced. My teeth were in perfect condition, I was even in the process of having a root canal. I was 25 to 45 years old, est. in mid 30's and I had given birth to at least one child.

On November 16, 1993 a traveling geologist stopped along the road side about 100 yards north of the I 80, 75 miles east of Elko, Nevada. He needed to stretch his legs on his journey. While walking around he found my remains, my lifeless body lying in the brush. I was not wearing any clothes. My body had been posed like a cross with my legs spread, but I had not been molested. Unfortunately, I had been shot twice possibly by .38 caliber gun. One shot pierced my heart. I had also beaten by the creeps that killed me.

During the investigation the authorities discovered tire and drag marks that indicate I may have been murdered elsewhere. A couple of leads came in on this case. They believe that it might have been a van or station wagon that might have left the tire markings. A green over brown a mind 1970's station wagon was seen in the area possibly with Florida plates. Two men rolling something up possibly a body had been reported by one tipster. The driver of the station wagon had stated he was headed to Northern California. The station wagon was loaded with personal belongings like he had been living out of his car. The eyewitnesses also stated the car had a black and white cat and a three legged dog (possibly Rottweiler, missing was a front leg). The man they are seeking in connection with my death is described as being 6'1, brown hair and short beard. Remember he was driving a mid 1970's station wagon in the 1993 possibly headed from Florida to Northern California.

The saddest part is I may not have been his only victim. There were similar killings in other States. Like he was traveling across the country and just killing women.

Do you know this man? Does anything about this story sound familiar? Perhaps you knew a guy with a three legged dog, who drove a mid 70's station wagon? Anything you can tell the police would be helpful.

Also would you please circulate my photo? Please show as many people my photo as possible. This way I might find my family and be able to rest in peace with my true identity! Thank you from the bottom of my heart.

Not many blogs make me stop and read almost all their current posts. Topics like these bring be extreme sadness. Its a great thing you are doing. It saddens me to see how many lives go off without any closure. :(

Thank you for stopping by and reading. Its people like you with a heart that will make a difference in a persons life. All my best to you.

Such a sad and tragic story! So much information and yet not enough.

I hope the Twitter World can help find your family. I know they have missed you for so very long and would love to hear from you just one more time! Here's hoping you can find the closure you're looking for. May God Bless you and your family, where ever they are.

It's great to have the social media community working so hard to help distribute these narrative in hopes to reunite these individuals with their families.

Let's bring her home. Let's find her identity. Let's reunite her with her loved ones.

Sometimes I just get memorized by some cases like I can't shake it.this is one of them.I don't like any of these do u know me.but this one for some reason has got me I search a lot for her face for a .missing person.something just isnt right don't add up.I son t know.but it has my attention.

This one has me. I'm not sure why.something don't seem right. When I first read this my little voice in my head said someone involved in the investigation knows something. Weather they know her or know who did it.its maybe they didn't follow threw with their hunch on something. Please Jesus give peace to her and the family.

I work on a lot of cases ,This is one that I definitely will be following and sharing on the pages we have. Do you know where in Nor - Cal he was headed ?