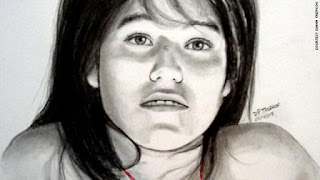 My mom kicked me out of the house...or at least that was what one of the last people to see me alive says I told him. But I s'pose I should stick to the stuff they know first, huh? Okay.

On April 27, 2002, my body was found behind a strip mall (not far from the campus of Arizona State University) in Tempe, Arizona. The coroner said that I was between 15 and 19 years old, of either Hispanic or Native American descent, stood about 5' 1” tall, weighed 125 pounds and had dark hair (12.5 inches long) and brown eyes. I had an 'L' shaped scar on the back of my left hand and another scar on my shoulder. I was wearing a red tube top-type halter, blue jeans with a side zipper and eyelets along the waistband, blue underwear, white crew socks and black shoes (size 6.5 with 3” wedge heels). There was a purple hair elastic around my wrist and faded purple nail polish on my nails. The cause of death was found to be acute cocaine intoxication.

So...who was I? One clue that was found was a CD case that was lying near my body. A fingerprint on the case led them to a woman who told investigators that her boyfriend has possession of that CD case – and that he'd been in Tempe the previous night...which they believe was the night I died. When the boyfriend was questioned, he stated that he had seen me by the side of the road and gave me a ride. He told the investigators that we spoke to each other only in Spanish and that I told him I'd just been kicked out of my house.

After riding around a bit this other guy got in the car. He was a drug dealer. He gave me some drugs. There is a rumor floating around that the two guys, the one who picked me up and the drug dealer didn’t “indulge.” Almost immediately (or so they claimed), I went into convulsions. Instead of taking me to a hospital or calling for help, these guys pulled over behind the golf store at the strip mall...and dumped me out of the car. Nice guys, huh? Then the driver (you know the woman’s boyfriend) he dropped the dealer and told him to call 911!

So there you have it – the only 'story' the police have to work with. Did my mother really kick me out of the house? In any case, after 8 years, I would say that it's high time I got to finally go back home!

VIEW HER PROFILE DATA AT A GLANCE: Maricopa Arizona Jane Doe April 2002
Posted by RJ at 9:23 AM

When I first saw your tweets, I thought this was a gag stunt, please forgive me. I salute you for your work and hope you bring justice to all you seek!
Sincerely, William Cobra Staubs

Rebel J. Morris
Can You Identify Me

I swear that this girl looks like someone I knew, yet I can't put my finger on it...as I see it, she resembles Tiffany Reid! Even though there is a date conflict, maybe no one reported her missing till MUCH later...