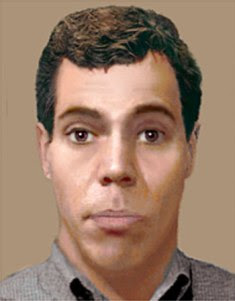 I’ve been waiting around for a long time. The view from here is distant and cold. I’m stuck in this zone. I’m not moving forward. I’m not moving backwards. This zone is in between, distant and cold. This probably angers many people right now. People who want to believe in the afterlife. Listen, I’m not saying there isn’t an afterlife. I’m simply saying that right now I’m stuck in this zone. Don’t be angry. If anyone should be angry it should be me. Right?

March 2004 my human remains were found by a driver who lost control of her car. Can you believe that? It gets better. So in March of 2004 this woman, a new driver, makes this illegal u-turn in Plainview, New York and ends up near me! She had the misfortune to get messed up and her day got better when she found a dead guy! You have to feel a little bad for her. I’m sure she’ll never make another illegal u-turn again officer. Anyway, it’s a good thing she came along. Turns out, I’d been waiting ten to twenty some years to be found. That’s right count them ten to twenty plus years that my bones were sitting there off that utility road waiting, just waiting for someone to make a wrong turn. Thankfully on that March day she did.

Okay now what? You found me. Who am I? The authorities will tell you that I’m a white possibly Hispanic male. I stood between 4’11 and 5’4. I was thin with a 26” waist line. They guess I was about 35 to 45 years old. My clothes were still there, turns out I was wearing “a red members only waist length jacket imported into the USA in the spring of 1982, tan pleated canvass bell bottom pants, a button down white shirt with an orange and blue striped pattern and a 1960 gold Bulova watch” according to Empire State News. Does that help you figure out who I am?

This cold case sleuthing group has some smart people over there and they realize that I probably didn’t die prior to 1982. That’s of course assuming that I bought my Members Only jacket new here in the United States, since that’s when it was imported. What if I bought it somewhere else? What if I was imported, not my jacket? Where could I have been from? “When you put it on, something happens,” is the tagline for the Members Only jacket. In my case, I put it on and well we know what happened. The jacket was manufactured as early as 1975. It’s possible I could be from the United States or Europe or anywhere in between.

The coins in my pocket were from 1974. Not sure what that tells you. Let me give you an example. Pull some coins out of your pocket and tell me what date they say. Then consider the year you are reading this. Do they match?

Nearby me was a hair pick. This tells everyone I might have had an afro. It could also tell you that it wasn’t my pick. Maybe it belonged to someone else who was in the area. Maybe even the person who left me there. Also nearby was a wallet with an oil company logo on it. According to the Long Island Press the cops looked into the oil company for potential employee match to no avail. So there’s a hair pick and a wallet that may or may not have belonged to me.

Why my remains were placed off that utility road is something that only time will reveal. Most everything will become clear when you find my identity. Find out who I am, tell my family and bury me so I can finally, after all these years, rest in peace. Not much to ask, right?

If you have any information call:

Please email our office at canyouidentifyme@yahoo.com to discuss further.

Thank You,
Rebel J. Morris
Can You Identify Me?

The first chance we have we will take your concern to local law enforcement. However, due to the nature of your concern it is not a high priority matter for us or law enforcement. Although we do agree a legitimate concern. You may also contact that them yourself if you would like with the same information.

Please note that Can You Identify Me did not provide the forensic sketch for this matter. Therefore, we can not do anything other than carry forward your comments to local law enforcement.

All My Best,
Rebel J. Morris
Can You Identify Me