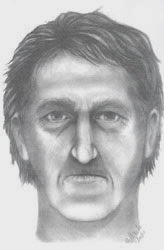 This man may have led a simple life, sporting animated cartoon characters on his clothing, but his life got complicated. Someone somewhere out there took offense and wanted him gone.

Hamilton John Doe may have worked in construction. This is an assumption based by the compressed disc in his spine. He also had elbow surgery leaving implanted orthopedic screws and most likely visible scarring. His dental hygiene seemed nonexistent as he had no upper teeth, and several on the bottom had excessive decay and staining.

Based on the Tom & Jerry T-shirt that read “Easily Amused” and the poor dental health of this man, one might draw the conclusion he was homeless. Perhaps at one time he was a construction worker or did similar work that resulted in the spine and elbow conditions. It’s very possible work fell short and he was laid off. Some proud men will leave home to find work and never come back. Could this have been his story?

Hamilton John Doe may have been a mild-mannered individual living on the streets. Unfortunately, his death was anything but mild mannered. He was brutally stabbed to death and then left in garbage bags in a remote wooded area of Hamilton County, Tennessee. A killing this severe suggests the killers wanted to exact retribution against him.

Was he killed because the killers don’t like homeless people? Or was he not homeless at all, but instead somebody important, somebody who knew something he shouldn’t, somebody who had enemies? Enemies who wanted him dead.

Either way this man had family or friends who deserve to know what happened to him. Help us help him find his identity and inform his family about the fate he met on August 28, 2006. Read his profile page to get his physical description.

NOTE: Over 100 missing persons have been ruled out as a match to this man.

If you have any information about this man, please contact: