Does the name Randy Kraft ring a bell? Here’s a clue: He murdered at least 63 people between 1972 and 1983. You may ask what this has to do with me. Unfortunately, the authorities believe that I was one of his victims. Thankfully, he was caught, imprisoned, and sentenced to death. But along with several other victims, I remain unidentified. On July 18, 1980, my body was found fully clothed along Interstate 5 near Woodburn, Oregon. Based on my appearance, it seems that I was probably homeless. If you read anything about Randy Kraft, you will find that he had a preference for young male marines. He frequented gay bars and was a known alcoholic. But just as he had a certain preference, he also picked up hitchhikers along the highways in both Southern
California and Oregon. The danger to hitchhikers became so prevalent that the Eugene Register published an article on July 29, 1980, (just days after I was found) with a headline “Men increasingly vulnerable to hitchhiking danger.”

After he was arrested, police found a scorecard of sorts where Kraft listed all of the men that he had murdered. Each person had a name or abbreviation of the place where he was killed along with some identifier. My name was Portland Elk. Since I was found near Portland, it is possible he killed me somewhere around there and then dumped my body on his way out of town. The reference he made to Elk has not yet been cracked. Maybe I was an elk or deer hunter, or maybe I was from one of the many Elk City locations throughout the western states. There could be another significance to this nickname. Do you hold the key to cracking this code? 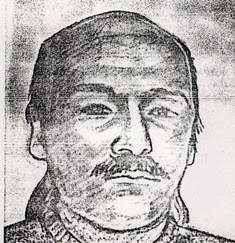 Enough about Kraft. What is known about me? I am a 5'6", 160 lb. Caucasian male between 35 and 45 years old. If I was indeed a victim of Kraft, it’s possible I was in the lower age range. This would put my  birth year somewhere between 1935 and 1945. I had blue eyes, brown hair that was balding on top, and a full moustache. I mentioned before that I was fully clothed when they found me. My outfit of choice that day (or many days if I was homeless) was a red pullover T-shirt, Wrangler blue jeans, socks, briefs, and brown leather moccasin toe boots (or work boots).

Maybe I was construction worker and was hitchhiking from Montana, Wyoming, or Idaho to try to find work. Maybe I had a family who wondered what happened to me. Right now, there are only two people who know my story, and unfortunately, neither of us is alive to tell it. What happened that fateful day in July? All I wanted was a ride to quicken my journey. Instead, my life was snuffed out.

Can You Identify Me? Do You Know Who I Am?