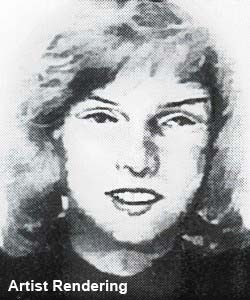 They call me “The Nation River Lady” and “one of Canada's most enduring mysteries” - but I would rather just be ME. Thirty-five years is too long to have gone without my own name! Can you help authorities finally figure out who I am?

On May 3, 1975, I was found floating face down in the Nation River about 100 yards from the Highway 417 bridge. The Nation River is west of Casselman, Ontario and just thirty five miles east of Ottawa. I was wearing only a light blue undershirt or body suit, pulled up to my shoulders. A man's necktie had been used to tie my wrists and two more to tie my ankles. One of these ties was known as a ‘Canadian Tie’ and had three Canadian emblems on a navy blue background. The necktie was made in Montreal and sold by various stores in the province of Quebec and in the eastern part of Ontario.

There were two fringed, green cloths around my head (one of them a tea towel printed with an old Irish/Gaelic blessing), and a distinctive black plastic-covered co-axial cable had been tightened around my neck. This cable was the type used in cable television hook-ups and there was a splatter of gray paint on it. Investigators learned that the cable was manufactured in Renfrew, Ontario and distributed in the Ottawa, Hull, Montreal and Brockville areas. They estimate that I may have been strangled as early as the summer or early fall of 1974 and thrown into the river.

I was Caucasian about between 25 and 50 years old, 5’2” to 5'3” tall and weighed about 100 pounds. My hair was shoulder length and brown (but had recently been dyed a reddish blonde) and my eyes were blue. I had extensive dental work – including partial upper and lower dentures – and had also had my appendix removed.

They said that I never had children, but I was still someone's daughter. I had friends, loved ones...maybe even a husband! Can you be the one to help put a name to my face?

VIEW HER PROFILE DATA AT A GLANCE: Ontario Canada Jane Doe May 1975