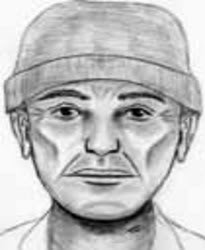 Can you imagine spending twenty years dead before someone finds your remains? Sounds pretty bad! You know what’s worse? Going over forty years dead and no one knows who you are, your identity.

I guess it could be funny. You know if you were a criminal and always running from the law you probably didn’t want folks to know your name. But even criminals don’t think, don’t realize, wouldn’t consider that a man could go forty plus years without a name – unintentionally. It’s possible though. It’s very plausible actually. Take my story for instance.

Oh wait, I can’t tell you my story. For my story you’d have to know my name. And you don’t. So now what?

How about I tell you a short story instead?

On September 14, 1991, in a swamp off Eaton Lake, State Hill, town of Greenville, Orange County, New York a set of human remains were discovered. It was determined the remains belong to a white male approximately 55 to 65 years old, who formerly stood 5’8, who suffered from osteophytosis or in laymen’s terms bone spurs, and had extensive dental work done. He was wearing blue trousers; yellow, long-sleeved, fitted shirt; blue knit socks and shoes and a knit sweater with assorted buttons. There was also a pair of wing tipped shoes discovered. He carried a black, plastic wallet in the right, back trouser pocket.
Along with the remains some personal items were discovered: A black, plastic, memo book cover, U.S. coins dating from 1964 through 1972, a vinyl, gym-type bag, a T-shirt, a Dynabeat Timex electric watch with a rubber wristband, six keys with binding numbers G33221 and G39241 (possibly part of a master key program) and eye-glasses. The eyeglasses were imprinted with the name of Orange County optician D. J. Riehle. The bifocals were manufactured by Swank Opticians, between 1974 and 1978, based on the prescription: R-1.00\I-1.00 A+2.75 which is a common prescription for near-slightness.
These remains belong to me and remain unidentified. 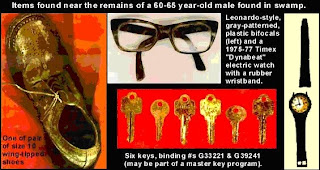 It’s been estimated that I died sometime between 1971 and 1981. You are reading this in what year? You do the math. It’s been a long time.

It’s about time someone figured out who I was. Don’t you think forty years is a tad too long to go without your identity, unintentionally?

If you know who I am, please call:

VIEW HIS PROFILE DATA AT A GLANCE: Orange New York John Doe September 1991
Posted by RJ at 10:00 AM

This is near the PA border. Keep this in mind when looking.

Couldn't they do some type of cross check of the optician's records? Love what you do for these people!