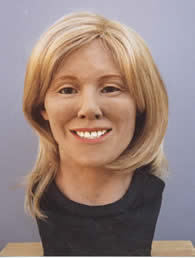 So they are learning who I’m not. What they don’t know is who I am. Who am I? That’s the question of the decade. Until then you can call me Vicky, Vicky Doe.

I’m a white female sixteen to nineteen years old who weighed about one hundred and forty pounds. There is speculation that I might have been as young as twelve, but I think the primary focus is sixteen to nineteen year old missing teen girls. So what do you know for certain? Well, I was white! And I think everyone believes I was under twenty years of age. Aren’t you lucky you have hit the information jackpot! Sorry, a little sarcasm.

This might help some. I was wearing a Harley Davidson t shirt. Also I had some interesting jewelry: a yellow pinky ring, a yellow necklace with a black crystal pendant, a clear stone stud earring and another necklace but this one is different, unique. This next necklace is described as wizard hands holding a round tiger-eye stone pendant. If you really think about this jewelry you might think about where I might have bought it. Maybe it was from a traveling convention of some type. Maybe it was from Planet Harley. I wonder how much this jewelry cost? Or maybe this jewelry came from a metaphysical store. There are so many things to consider from my jewelry alone that might lead you to figure out who I am.

Jewelry’s not your thing? Well how about the fact some cop pulled me over with my friends and gave us a warning. Poor guy probably wishes he took our names and gave tickets. But nope, he just gave us a warning. Oh but he did take a photo of me. So they have that photo to use as a comparison when you figure out who I am. Well we told him that we were from . Do you really think we told him the truth? Based on this cop's information it’s speculated that I might have run away from .

If I did run away from with my friends how did we get to ? You know it was not long after that cop stopped us when I died. And it was only two or three days after I died that they found me in a makeshift campsite in Pike San Isabel National Forest. So how did I end up in Douglas County, Colorado dead on June 15, 1993? And if I had been traveling with friends where were they? Where did those so called friends go?

Of course you know everything written here is speculation. The only thing you know for certain is that I was found on June 15, 1993 in , I was white and wearing a Harley Davidson T shirt with unique jewelry. This is all you know for certain. Then again there is that picture of me. The one the police have. Once you think you know who I am that photo will identify me along with my DNA and dental records.
Chances are I wasn’t missing long at all. Then again I could have been missing my entire life, kidnapped as a child. Or maybe my parents were bikers and I traveled with them. Maybe my parents died and after I traveled with their friends. I don’t know that friends would really just leave me behind like that, or would they?

It shouldn’t be hard to figure out who I am. There are some very specific details that should lead you to my identity. Plus they have that photo of me. So what are you waiting for tell them who I am. I’m ready for my identity to be released!

VIEW HER PROFILE DATA AT A GLANCE: Douglas Colorado Jane Doe June 1993
Posted by RJ at 3:55 AM

SO sad will repost to see if anyone can recognize her-Prayers sent up.

I don't recognize her but my son had a necklace like that, bought at a Renaissance Fair...hope she's identified soon.

If there is a photo, why wasn't it posted? The sketches never look the same as the picture.

Why don't they post the picture of her that was taken by the cop? An actual picture is a lot better than any reconstructions.