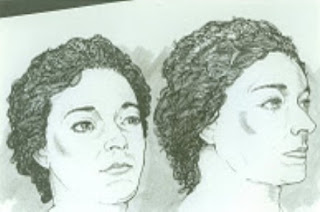 My name is Judy Beaty Doe. I was adopted by a wonderful couple in 1993. When they read about my tragic death, they leapt into action. They didn’t want to see me without a proper burial. So they donated a family plot. But that’s not all. They made sure I had the best burial anyone could ask for. All the services were donated: the flowers, the minister, the marker and even the funeral home donated their services. It was amazing. I had 27 people attend my memorial service.

You know, the truly amazing part is that my adopted family and those 27 people had never met me while I was living. They all came together for me after my death. How amazing is that?

My adopted mother is the best. She looks after me every year. She knows that I have a birth family out there looking for me. She simply wants them to know that I was taken care of after I died. I was given that proper burial that most never receive and she says I can even stay here when my family finds me, if they want. She’s the best adopted mother anyone could ever want.

You probably figured out by now I’m deceased and another victim without a proper name. For now you can call me by my adopted family name: Judy Beaty Doe.

On February 13, 1983, my remains were found face down in the snow off US Route 250, one mile north of Littleton, Wetzel County, West Virginia. This area is also very near to Marshall County. I had been dead for about two days prior to my discovery; however, I had only been placed in this location a couple hours before I was found.

Did someone want me to be quickly discovered? Why wait two days to leave me in an area where others wound find me? Law enforcement did not find evidence of a struggle. This does not mean I wasn’t killed. Obviously, something happened to me two days before someone left me here in the snow.

Some reports state I might have worked or frequented a tavern in another county and that I may have been from the Pittsburgh, Pa. area. Other reports that Hare Krishnas frequented these areas and my death might have been related to an event held during that time period. Then there is a white male in his 40s they were looking for, who might have had a connection to me. Also there was something about a pickup truck that they were looking for, possibly due to the tire tracks left in the snow.

Now you know I had poor dental care and had delivered a child. Maybe my child is out there looking for me?

You know, there is one blatant inconsistency; the rumor that there was no sign of struggle, even though I had a scar on one of my index fingers. Doesn’t one normally get scars on their fingers when warding off knife attacks? Then again, maybe it was an earlier attempt on my life or another struggle that yielded that particular scar.

Well, there are many plausible reasons, many possible theories for my death. The one consistency in this entire story is that people love me. I’m cared for and loved by many even though they don’t know who I am.

If you can help them figure out who I am, that would complete this story. Finding my identity and my birth family, or my children, would bring joy to the hearts of those who care ever so deeply for me now, the Beatys.

If you have any information about the identity of this woman, please contact:

HER PROFILE DATA AT A GLANCE: Wetzel West Virginia Jane Doe February 1983
Posted by RJ at 8:25 AM

Looks like someone i used to know by the name of Angie who lived in marlboro with a violent husband...She traveled frequently with bikers in KY, IN, and a few other states...

I pray she is identified soon. They all break my heart,

Anonymous..can you tell the police your suspicion?