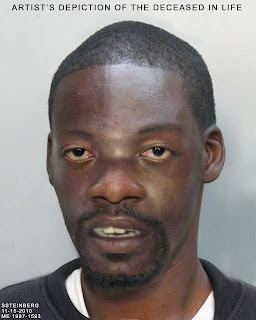 Happy Birthday, America! Just three days before I was found on July 7, 1997, I must have been celebrating Independence Day by watching the fireworks. You know they are spectacular and my favorite part of July. The sparkling lights lighting up the sky from miles away, and the array of colors are just absolutely mesmerizing. Since I was probably homeless, I could only show my pride by picking one of the two shirts I owned with any patriotic colors: a black T-shirt with a red insignia along with Florida State across it. I was also found in beige Cotler dress pants; a black belt with a rectangular buckle; my other T-shirt, size large, JUN JUL brand; and—don’t embarrass me but—medium Fruit of the Loom briefs with a gray waistband.
The night I was found, I may have not been hanging around with the best crowd. The back of the warehouse on 78 NE Fourth Court was where I might have made my home; more times than not, it was used for drug users to feed their habit. When you live near a place like I did, that kind of life can suck you in in the worst way possible. People may think because I died of a drug overdose that I might not be worth finding or even giving a name. When you’re found in a place like I was with no identity, what do you think people would say about me? A junkie who probably deserved what happened to him? But no one will ever know what the truth is and finding out my real name is the first step in in doing so. Think about it from your perspective, wouldn’t you want to be given the benefit of the doubt?
The only defining characteristics that the authorities provided were that I was a 5'11", 135 lb. African American male between the ages of 30 and 42. I had brown eyes and black hair with a beard and mustache to match. Lying face down in the rear of the warehouse with scars from track marks on my right arm, who knows what else could have happened to me? Please help uncover the truth and discover my name. I would really like to get rid of the label John Doe.

If you have any other information about this case please contact:
Miami-Dade Medical Examiner
303-545-2400Agency Case number 1997-1593