Not all crimes get solved! Rayburn Doe 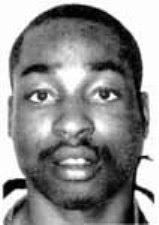 The pre dawn hours of February 16, 2000 there was a shooting. The shooting was in a park. The park was located in the 5000 block of Fort Totten Drive, Washington D.C. The victim was pronounced dead on arrival at the hospital. Another day. Another shooting. Another victim.

The police figured they could identify the victim by simply running his prints through the FBI database. Sure why not. He got shot, so he must be a criminal. No matches were made. The Police continued their investigation. They combed missing persons reports, ran DNA tests, and they walked the streets of their city trying to find out who this man was and what happened to him.

Unfortunately, the police haven’t been able to identify the shooting victim from those early morning hours eleven years ago. They don’t know what happened and they don’t know who he is. He is me. This is my unfinished story. I am now logged in the books as John Doe. Today, I get a new temporary name Rayburn Doe. Either way, it’s not my name.

I was an African American Male estimated to be in my late teens or early twenties. My hair was short, curly and black hair. You could see a stylish not overbearing beard and moustache. My height and weight averaged at 5’5 and 144 lbs. That morning I was wearing a Phat Farm logo t-shirt and blue jeans. Pay attention now these next details about me might be the most important

I had three very distinctive tattoos: the number 13 with an arrow as part of the number on my right shoulder,a panther on my right forearm, and a demon (in progress) on my back. Now did you catch that? I was in the process of having a new tattoo of a demon put on my back. This has got to register with someone.

Not all crimes get solved. But all people deserve a name. Help me find mine. 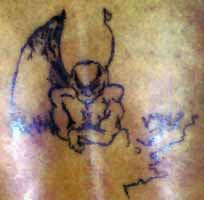 If you have any information please call:

VIEW HIS PROFILE DATA AT A GLANCE: Washington D.C. John Doe February 2000
Posted by RJ at 3:00 AM

Thank you for visiting Can You Identify Me and viewing America's Unidentified victims.

We agree those are most like gang related tattoos. However, we don't do hands on investigation as that would be against the law. We leave all of that work to local law enforcement. I assure they did that when this victim was found, and they were unsuccessful in the search at that time.

We believe that local law enforcement has a strong knowledge of the area and the gangs in the area. They are very aware of this man tattoos and those potential connections. They are just as eager as the rest of us to see this young man identified.

One great way for us all to help is to let everyone know about this victim. Help us help them by spreading the word and sharing this information with others. One day the right person will see him and come forward.

Thank you so much for taking the time to comment. Please continue viewing these victims. We appreciate your comments, suggestions and assistance.

The demon...while most likely associated with gang symbols is DEFINITELY associated with a game. I recognized seeing this demon in the past. It's the whole reason I am even looking at this case or commenting here. Unfortunately the game that I saw it in was a good 20 years ago. Being as how this is a *new* tattoo, it is possible this man was trying to start a new life...perhaps getting in touch with card players (poker) or role players of some sort. I hope this helps.

Do you know the name of the game? This man died 11 years ago. So we are closer in time to that 20 year mark you mentioned.

If you could drop another note here or email or call our office with more information that would be helpful.

When came to this page I started to go pass his picture but something told me to go back for a second look, although I don't know him his appearance looked quite familiar in the sense that he looks like a local, if that makes sense. After reading his profile I think I have atleast seen him in passing, being as though where they found him is merely blocks from where I was living at that time and it seems we may be around the same age, which may account for why he looks so familiar. I truly wish I could be of more help, however I do have a suggestion. Being as though the tattoo on his back was in progress I wonder if investigators have tried showing the picture to local tattoo artists/parlors in the area in hopes of finding the tattooer and identifying him that way.

If he was a gang member, he was very good at staying out of trouble. It may be possible that he was a former gang member. But it's odd that no one knew who he was. You'd think that his fellow gang members would have said who he was, unless they were the ones who killed him. Maybe he wasn't a gang member and wanted to be. I know plenty of people like that. Or he may not have been from that area.

I have learned that 13 with an arrow is very specific to a HUGE gang present in 38 states, mostly in the South (alliances with the Mexican Mafia), but their largest presence is in California, specifically the L.A. Area. The arrow apparently delineates whether you live East or West of I-10. There is a great article published by a corrections officer here: http://www.corrections.com/news/article/29911-sureno-gang-graffiti-understanding-the-art-of-war

Now, that gang is mostly Latinos, and it is said that Latino gang members do not like African Americans. However, it should be noted that this gang in particular, in Los Angeles, has a strong affiliation with the Crips, the well-known L.A. African American gang commonly at war with the Bloods.

This victim may have been murdered in Washington, D.C., but that (potential) gang symbol,

Grrrr...having the worst time with this commenting system.

That symbol, and the fact that it has an arrow that ties in to I-10 in Los Angeles may warrant checking that area for reports of missing to find a match, too.

I hope this helps.