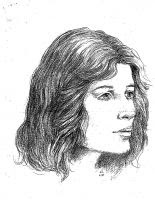 Could I have been a recent high school or college graduate? Maybe I was a die hard Van Halen or Rush fan. Could I have been backpacking through California on my way somewhere else? Or was I dropped off here by an unknown entity? The possibilities are endless.

The realities are not. My reality is that I met my fate over 27 years ago. On July 8, 1984 my remains were found six miles north of Nevada City along State Hwy 49, 50 feet below a dirt parking area. That location is just south of Independence Trail Head. It appears I might have been strangled. I had been dead two or three weeks prior to someone finding my remains.

The authorities looked for my killer. They tried to figure out my identity. They searched and followed many leads, to no avail. I was killed and dumped in Nevada City, Nevada County, California in 1984. It’s been 27 years and the authorities haven’t forgotten about me. Nope, they are still working very hard to determine who I am.

They can tell you that I was a white female approximately eighteen to thirty years old. I stood about five feet, five inches tall and had a slim build. I wore shoulder length blonde hair. I wore only one piece of jewelry: a yellow gold ring with a green stone. I also had several layers of clothing on when I was discovered.

There are endless possibilities of who I am: a transient, a concert fan, a student, a traveler, or a victim of kidnapping. The list goes on. Why were those five things mentioned? Well, the authorities think I might have been a transient because of the several layers of clothing and the inability to find my identity. I might have been a concert fan because both Van Halen and Rush were playing only weeks before my death. You know teens love to follow their rock bands from town to town. I could have been a student because that ring might well have been a school ring, maybe from high school or a college I had been attending. The fact that I could have been backpacking, hitchhiking or simply traveling through Nevada is possible since they couldn’t find any missing women that fit my description. Then there is always the possibility that I was a victim of foul play and could have been kidnapped. The scary part is that all of these options could be true. The reality is they still don’t help the authorities figure out who I am.

Maybe the re-release of my forensic sketch might jog someone’s memory of what happened all those years ago. Or maybe, my family or friends will see it and call in. Whatever it takes, it’s worth the try.

If you have any information about this woman, please contact:
Nevada County Sheriffs Office
530-265-1471

Seemd if no id avail,and several clothes worn..sounds like a runaway..