John, Johnny, Robert or Ronald--you might as well call me JR 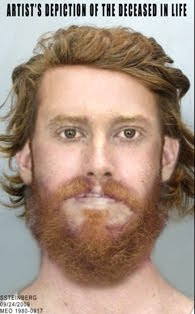 In April 1980, my friend Jack Roy Davis and I were staying in the Siesta Motel on 34th St. North in St. Petersburg, Florida. It was called the Siesta Motel and I guess that’s fitting since Jack and I took a permanent siesta on April 26, 1980, right there in that motel room.

I’ll be straightforward with you. We were killed. The police had a suspect, but he was gunned down by his girlfriend just four months after we were killed. I guess you can call that Karma.

My friend was identified as Jack Roy Davis of Knoxsville, Tennessee. The person suspected of killing us was also from Tennessee. Unfortunately, they couldn’t figure out who I was. The authorities came close. After investigating, they have reason to believe my name was John, Johnny, Robert, or Ronald and that I could have also been from Tennessee.

However, I also could have been from or . I guess Tennessee is where most people probably assume I’m from since both Jack and the killer were from Tennessee. It makes you wonder did all three of us travel down to Florida together. Maybe that girlfriend was part of our posse. Maybe she knew something about who we were and why we were killed. Maybe that’s how they figured out my name was John, Johnny, Robert, or Ronald. You can throw around conjecture all day. Bottom line, that’s all they know, four possible first names, three possible states of origin.

Well, that’s not exactly all they know. They know some details about my physical description, clothing, and jewelry too.

I was a white male, 20 to 45 years old, leaning more toward 35 to 45. I stood 5'8", weighed 155 lbs., and had hazel eyes. I had what they are calling moderate length light reddish-brown hair. I also had a beard and mustache of the same color. My nose and forehead had freckles.

I didn’t have any tattoos, but I had some scars. There was one scar that was 16 inches long from the right side of my chest to the left with suture marks. Both my nipples had scars under them. I also had one scar on my left arm with suture marks. There were also two wire sutures in my sternum from prior heart surgery.
Nothing really interesting to call your attention to about my clothing, I was just wearing your typical blue jeans. However, I had two interesting necklaces. One was white metal with a white star, and the other was gold metal with a horn shaped medallion.

HIS PROFILE DATA AT A GLANCE: Pinellas Florida John Doe April 1980
Posted by RJ at 8:24 PM