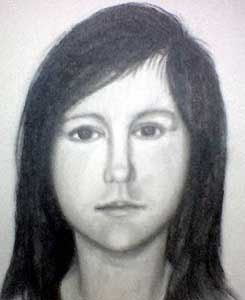 On July 15, 1982, a 14- to 18-year old homicide victim was found on cemetery grounds off State Hwy. 94 in Warren County, New Jersey. Authorities believe she may have been deceased for up to one week prior to discovery. The girl was white, had shoulder-length brown hair, weighed about 110 lbs. and stood 5'2".

That headline, that girl, she was me. I was killed by a pimp, who claimed I was part of his stable. He claimed he beat me to death.
I’m popular you know? I have had books, TV shows, and movies done about me. And in 1983, I was the very first unidentified victim to be entered into the FBI’s national database. The FBI wanted to help figure out who I was. Like many others who have been entered into that database since 1983, I remain unidentified.

Lots of interesting tidbits about me are out there. Let’s see, stories surfaced that I was a maid in , from 1979 to 1982, a runaway from FL, the daughter of a dentist, and I was killed by a serial killer (actually a couple serial killer names were tossed around).

One of the tidbits out there was a theory that I might have been Diana Dye, a missing girl from California. A flyer comparing me to her was made and circulated nationally. My remains were exhumed and a DNA test was conducted. All they could extract was mitochondrial DNA (MtDNA). This form of DNA can only be compared to maternal relatives. Once they had this form of DNA, they compared it to Diana’s mother. Turns out, I’m not her daughter. She’ll keep looking for her daughter like they’ll keep looking for my identity.
Another one of those tidbits was more like a prediction by some psychic detective. The psychic said I was killed by someone already in jail. Turns out, the psychic was right. My pimp, the killer, confessed years after that prediction was made and he was serving time for another crime. In talking with him and a witness to my killing, the cops learned I was most likely from the area.

The cops have come a long way in trying to figure out who I am, but there is still more road ahead. I hold faith that the road will lead them to my identity and my family.

If you know anything about this girl please contact:

I wonder how credible this stuff from the pimp and ex prostitute is. Her clothing is so nicey-nicey. I don't see a girl who would wear such clothing working as a prostitute. I wonder if he got any adavantages from this "confession" or if he had anything to lose making it. This always looked like a fake to me, but maybe I'm wrong.

There was a girl that went missing in Toms River NJ in the late 70's/early 80's - I just can't remember when - it was a big deal then. I wish I could remember her name. Maybe someone can check back through the missing people in that area. I'll try to see if I can find out any info and post when I do.