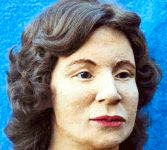 Why did I have to die? That might be question that will never be answered. Right now the priority is trying to figure out who I am.

They actually have some interesting information to go on, but it’s not enough yet to tell my family that I’m gone. Then again, maybe someone in my family already knows.

See, they are dancing around the idea that I’m a victim of domestic violence. They skirt around my injuries by giving the benefit of the doubt that I might have sustained those injuries in a car accident. True, you can get pretty messed up in a serious car accident. Whether it was a car accident or somebody beat me severely, you would think some hospital worker somewhere would remember me.

For the purposes here, today, my story begins on October 12, 1999, and ends on November 1, 1999. Those days, well, those are the days they found my skull and a few of my bones in a wooded ravine. The ravine was located on Emmons and Sorter Drive in Kansas City, Kansas.

From the scarce remains they found, they determined some previous injuries I sustained. It turns out my jaw had been broken, which required it to be wired shut for period of time. I also had a healed fracture to my left temple, plus my ribs had been fractured. Earlier in my life, I had extensive dental work, but prior to death, I received poor dental care.

The authorities have also estimated that I was a female, 26 to 40 years old, and I stood about 5'7". It’s also possible that I could have died years prior to the winter of 1999 when I was found.

OMG that scares me my 19 year old daughter lives in that county. prayers to find the killer.