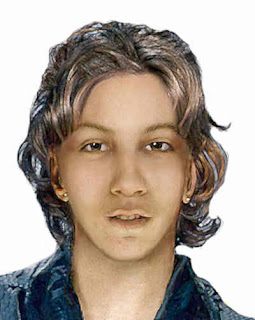 Possibly early morning hours of July 21, 1999, I was found along side a cornfield in a Rural area of Racine, Wisconsin. The cornfield was not far from the I-94. It seems I had been killed only hours before I was discovered.

I'm described as being a while female, 5'8" tall, and approximately 120 lbs. My hair may have been black, but is estimated and reported as brown with sun highlights. My eyes could have been brown, hazel, or green. Each of my ears were doubled pierced! I did not have any tattoo's or scars. But I had a cauliflower deformation on my right ear, which was possibly from a recent injury. It's also been stated that might teeth were in poor condition and my front teeth were protruding. Oh yea, and no one is certain how old I am. It's estimated that in 1999, I was between 18 and 30 years of age. But some speculate I could have been as young as 14, or up to 35. 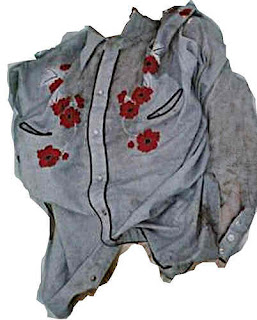 I was wearing a men's gray and silver country and western shirt with snap buttons and a red floral pattern on the chest. Also, black sweat pants.

It's been researched that the manufacturer of the shirt was Karman. They say it was produced and distributed throughout the United States in the 80's. After a little more research my narrator found Karman shirts were popular in the 70's and 80's and are now considered vintage.

The nitty gritty of the story is that I was killed. Actually, according to the coroner I was found with multiple injuries and they caused my death. I was then dumped in the cornfield only hours after I was killed. Why? What did I do?

Do I have family? Am I your daughter? Your neighbor? Your classmate? Your student? Did we meet in a bar? A nightclub?
Who am I? Why hasn't someone come forward to claim me, identify me?

If you have any information, anything at all, please contact:
Racine County Sheriff's Department (Wisconsin)  262- 636-3227

This makes me sad, how after all this time can this human soul still be unclaimed?

Thanks for visiting. It's hard to read, but I thank you for taking the time to go through the site. People like you will help make a difference.

I have been working with the Racine Detectives on this case since 2002.Glad to see it listed her. I will soon have here listed in NamUs as I am the Wisconsin Case Manager for NamUs

Thank you so much for stopping by and posting. I appreciate the update. I'm glad to hear she will soon be listed on NamUs. This is indeed good news. I can't wait for the day when we have all the old cases listed on NamUs. Thank you for your dedication to the cause.

*Cauliflower deformation: Two things hit me tonight~big rock and possible southpaw.(leftie) these in likely relation to her attacker*

The tomboy I was, I wore denim shirts very similar to Crystal's, minus the flowers, back in the mid-70's.

Thanks for All you do to help America's Unidentified find their way home! You Rock!!!

This is really sad and I hope that her she will be re-united with her family, sooner rather than later. I'm sure she has family out there who yearn to find out what has happened to her. So may God bring her home to her family, friends and community so that they will have their answers, give her a dignified burial and so that she can rest in peace. May He lead the person (s) who hold the key to solving her case to this site so they will be empowered to do the right thing and come forward with the needed information.

I know this girl went missing in 1977 but she looks similar and the height matches, I wish the sites of the missing would provide a little bit more information.http://www.missingkids.com/missingkids/servlet/PubCaseSearchServlet?act=viewChildDetail&caseNum=603887&orgPrefix=NCMC&seqNum=1&caseLang=en_US&searchLang=en_US